Author’s Note: The photos in this story may be distressing to some viewers.

The strength of an image lies in its ability to quickly create a strong emotional connection with a very broad audience. 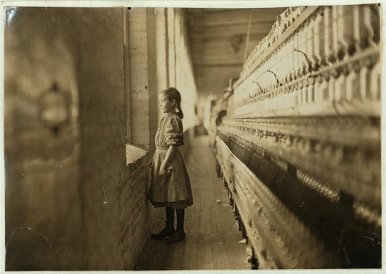 In the early 1900s, child labor was still extremely common in the United States. It was not unheard of for child laborers to work 19 hour days with just a one hour break. The National Child Labor Committee wanted to end the practice but statistics weren’t having the effect they had hoped. So, in 1908, they enlisted the help of Lewis Hine and his camera to spread the word.

Hine was perhaps the earliest example of an investigative photojournalist and documentarian. Over the course of the next ten years, he surreptitiously photographed exploited children in disguise. At various times he went undercover as a bible salesman, postcard salesman, or as an industrial photographer making a record of factory machinery. His fifty pounds of photographic equipment was harder to conceal and when he was unable to win his confrontations with management, he simply waited outside the canneries, mines, factories, farms, and sweatshops and photographed children as they entered and exited the workplace. It was these photos, along with the detailed captions, that ultimately ended child labor in the United States

In 1936, Dorothea Lange took up a job for the federal Resettlement Administration, documenting rural poverty and the exploitation of migrant laborers. When her car broke down on the way to work, Lang spotted Florence Owens Thompson and her children. She snapped just a few shots, one of which resulted in arguably one of the most iconic photographs of all time. Migrant Mother, as it came to be known, became synonymous with the Great Depression – a symbol of an era. The image is remarkable because it simultaneously depicts the dignity of the subject concomitant with victimization of her by class. 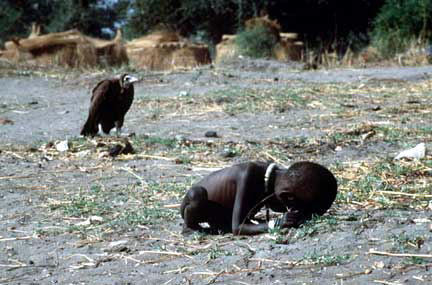 In the latter half of the century, when South African photojournalist Kevin Carter captured a single image showing a starving Sudanese child being stalked by a vulture, he won the 1994 Pulitzer for feature photography. The photograph, raised a lot of money for relief agencies. The photographer, on the other hand, came under very heavy criticism by the public for failing to intervene. Carter had been advised not to touch the victims because of disease, so instead of helping, he spent 20 minutes waiting hoping that the bird would take flight. When it didn’t, Carter scared the scavenger away and watched as the child continued its crawl to help. He then lit a cigarette, talked to God and wept. Subsequent research revealed that the child survived but died 14 years later from malarial fever. Carter on the other hand, tormented and broke, took his own life in July 1994, writing, “I am haunted by the vivid memories of killings & corpses & anger & pain.” In this instance, the impact was also on the photographer.

In the age of social media, scale is everything. In 2015, when the photo of three-year-old Aylan Kurdi lying face down on a sandy beach in Turkey hit the newswire, it woke up the world to the Syrian refugee crisis. Similarly, the 2016 image of Omran Daqneesh, a bloody faced 5 year old little Syrian boy covered head to toe in a thick layer of dust after he was rescued from a building in Aleppo hit by an air strike. His bare feet dangling over the edge of his orange chair, he looks stunned and dazed.

After these images surfaced, international humanitarian groups saw a surge in donations and their impact has since become the focus of a research study examining just how a single image could have more impact than statistical reports, charts, and graphs combined.

The human brain is wired for images. It processes images 60,000 times faster than text. In fact, 90% of information transmitted to our brains is visual.

And Images are immensely powerful. They have the ability to shift public opinion. The sear social issues into our consciousness. They offer glimpses into other people’s worldviews, cultivate empathy, and they have the power to galvanize public support. Indelible images like those showcased above can make someone remember a cause or campaign for years.

In the age of viral photos and memes on Instagram, Twitter and Facebook images range in their power from increasing your web traffic to increasing your social impact. If you consider that you’ll generate up to 94% more post views by adding compelling visual content, images make common sense. Since the use of images and visual storytelling, simply defined as a narrative that is told through the mode of visual media, is cheaper and more accessible than ever before, the question has to be: why are you not incorporating visual storytelling into your nonprofit’s media strategy?

This post is dedicated to the work and memory of Kevin Carter.